A traditional srilankan style rice cooked in a pot and baked in a banana leaf with a teaspoon of coconut milk. This rice can be frozen and stored for over a week. Warm it in a hot oven just before serving.

1) temper onions in ghee and add the curry leaves and pandan leaves.
2) stir in cardamon, cloves, pepper seeds and sauté for a minute.
3) wash and drain the rice.
4) add rice and turmeric powder over the tempered onions and pour the stocks.
5) add salt to taste.
6) cook until the rice is done.
7) wash, wipe and warm banana leaf over light flame and keep ready to serve rice and bake at the last stage.

This rice needs to be severed with frickadales, lumprey curry, green peas curry and brinjal pahi.

Once the rice is cooked serve on the banana leaves and pour a teaspoon of coconut milk and serve the accompanying vegetables and meat.
Wrap into a neat parcel and tie with a thick thread or string and bake in a pre heated oven for 20 minutes and serve hot with the banana leaf.
The fresh baked aroma of the banana leaf combined with the unique flavours of the spices used in the vegetables and meat plus the aroma of the slightly tempered pandan and curry leaves will definitely not fail to provide an appetite to devour and have an unforgettable lunch.
I would recommend this for picnics.

The frickadales, lumprey curry and brinjal pahi recipes to follow in the next posts. 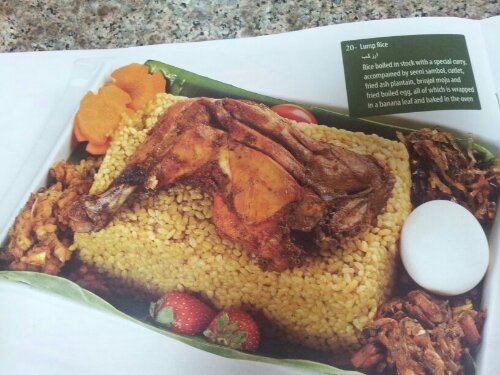 Thats a picture from a restaurant menu 🙂

Childhood as a foodie

Childhood memories are sweet. My childhood was sweet with sweets. I did groceries for the house, have my meal during the intreval at the school tuckshop and mostly we ate out. I always looked for something new at the school canteen and tried it.
I get myself a couple of idly, wada,  thosa, noodles or bun during my interval at school. I also had an ice cream or soft drinks with some kind of sweets. It was fun at that age. After buying a grocery item for mum I would get myself a few sweets from the grocery.  There is a wide range of sweets that I have not much space to mention or discuss about.  A few I can are pol toffee (coconut rocks), milk toffee, small jaggery, puhul thosi (made of pumpkin) and ice palam a frozen drink usually packed in a small packet which we used to suck the ice by making a small hole in the packet, it was fun.
Buying sweets from the shop and eating on the way back home is also another sweet memory. I still enjoy going to the shop just to buy a bottle of drink or a few sweets and chocolates.
When ever I go to India it’s the same I go to the shops nearby and get myself something. Thats how I recall.my food memories as a kid.
I used to make small side dishes after school and have with my lunch. I remember once walking to the shop next door to get a packet of soya, soon after the school van dropped me at home and I cooked it by following the instructions on the package.  It did turn out well. Sometimes I make pol sambol and umbalakada sambol (Maldives fish sambol) to have with plain rice. It was so delicious.

As a kid I had a few cooking disasters and one recipe made me tremble in fear as the food got stuck in the plate and the plate cracked. The worst part was It wasn’t my mums plate but my grannma’s.
It all went on as follow –
I’ve got a cousin sister who used to make these pol toffees(coconut rocks). I’ve watched her make and she did explain the recipe. I wanted to try making it and gathered the ingredients.  My assistant was my younger sister. We had to melt the sugar but what went wrong was we caramalized the sugar and added the coconut. Without checking the consistency we spread it onto a glass plate and ended up with no sweet and a broken plate.
Did I give up trying out new recipes? Not at all.

After that cooking failure I learnt how to make cutlets, laddu and a few other types of food at my home economics class in school.

The cutlets I made tasted good but cracked open before I took it off the oil pan.
But I never gave up practicing,  as they say

I got my cutlets uncracked as time passed by.

The laddu I made also cracked but I never wanted to try it again. I dint like the taste of laddu (semolina laddu).

I used to make banana milkshakes and it was perfect.

Trying potato halwa my mum’s recipe was a bit tough. The first time I made it the potatoes were raw and the halwa dint come together which we had to lick the condensed milk as it was so delicious we dint wanna throw. This particular recipe I never gave up. I kept trying and trying till I made it right.  The second time the potatoes were perfectly cooked and the consistency was just right but I took off heat too early and it was not set yet tased good. The thrid attempt was a success and finally everyone was happy as I wouldn’t be finishing anymore of the potatoes and condensed milk.

Then started my urge to cook and try new things which has followed until today and will be with me till the end.

Now wondering what age I was talking about? Well I was 11 when I forst started making the soya curry and pol sambol,  its not too early but still its too young.

Now am an adult and on vacation in sri lanka I have been revisiting the memories by tasting the sweets and snacks I had in my school days.

A few images of my so called sweets are to follow – 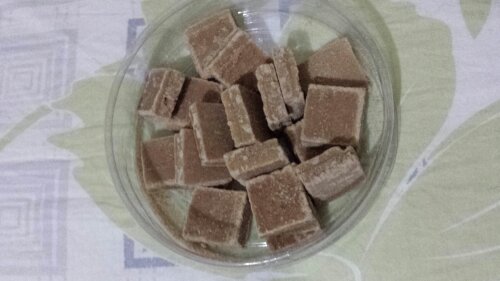 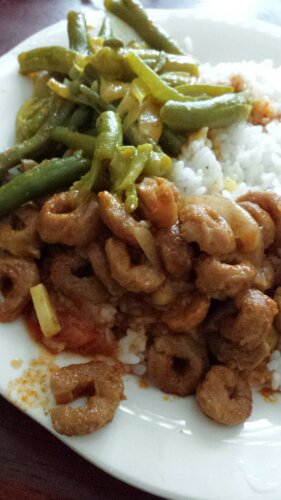 Thalaguli (a sweet made of sesame seeds and jaggery)

Gal siyambala (tamarind family) it so sour and tangy. You’ve gotta remove the shell and you’ll find a soft skin coated over a very tiny seed inside. You eat the skin and throw the seed. One of my after school favourites.

Jumbo jolly its so juicy and delicious. One of my favorite after school popsicles.

More food stories to follow in my next post hope you enjoyed reading my childhood food stories.
All images are mine and please ask if you need to use them.