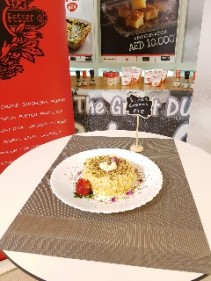 It was a random post which caught my eye and I decided to try my luck on baking by submitting my recipe for the great dubai bakeoff. I just chose a recipe which I tried and randomly decided to google it. Well it was the boston cream pie and my cookbook shows it as a pie with a crust but the Google gives a very different image so I decided to go for the trusted source and do a bit of reasearch.

Wikipidea says the boston cream pie was named so as in the early years the sponge or cakes were all baked in a pie tin. And the idea to use the custard as a filling for the cake was first brought up by the parker house chef in boston hence it is named the boston cream pie.

It is a very simple cake and I decided to try the original parker house recipe. I practiced it in a small batch and to my surprise it was good with the custard filling. I’ve never tried a cake with custard filling before so it impressed me.

I have made custard but this custard was a bit different and technically tricky.

I chose this recipe to try at the great dubai bake off and the steps went as follows.

I did my sponge in the kitchenaid mixer which I was very happy to work with as the mixer itself has got a great recognition amongst the bakers. I did my custard and had to freeze both to cool them and stack it up. Working at miele gallery at sheikh zaid road adjacent to sheraton was such a great experience with high quality equipments and facilities.

The boston cream pie turned out very soft and delicious that everyone who tasted it came over and told me it was tasty. That by itself was a gift for me as not many people come over and say what I made was tasty. Especially at home. Not that the food doesn’t taste good but not many have or feel the need to comment. I remember the days when i bake something I go and ask my parents and siblings how it was and after which they tell me it was good.  Yes my mum used to tell it’s good or bad without even me asking 🙂

Well back in dubai its still same.

So hearing people talk and say wow it’s so good was such a pleasure. This is why I like to participate in competitions.

Whether I won or not the small genuine comments matter. As a food blogger it helps me create a story. It helps me build my blog post. It inspires me to cook and bake more.

Here i am with a boston cream pie recipe with my own twist.

BOSTON CREAM PIE
SPONGE CAKE
• 7 Eggs, separated
• 8oz. Sugar
• 1 Cup Flour
• 1 oz. Melted butter
Directions:
Separate egg yolks and whites into two separate bowls.
Divide the sugar into 2 and add to the separated egg bowl.
Beat the yolks until combined and the sugar has dissolved.
Beat the egg whites until soft peaks.
fold the whites into the egg yolk mixture.
Gradually add flour, mixing with a wooden spatula.
Make a well in the centre and pour the melted butter.
Mix well.
Pour this mixture into a 10-inch greased cake pan.
Bake at 350 degrees for about 20 minutes, or until spongy and golden.
Remove from oven and cool completely
PASTRY CREAM

When it starts to boil strain the mixture and return to the flame.continue cooking.
While this mixture is cooking, combine the sugar, corn starch and eggs in a bowl and whip until ribbons form.
When the cream, milk, butter mixture reaches the boiling point, whisk in the egg mixture and cook over a low flame
Make sure the cream is thick for the boston cream pie
Refrigerate until assembly time
Make the ganache
1 slab of dark cooking chocolate
1 tbsp heavy cream
• Melt and mix the ganache ingredients over a double boiler
• Cool completely before topping
ASSEMBLE THE BOSTON CREAM PIE
1. Level the sponge cake
2. Cut the cake into two layers.
3. Spread the flavoured pastry cream over one layer.
4. Top with the second cake layer.
5. Reserve a small amount of the pastry cream to spread on sides to adhere to almonds.
6. Paste the almonds over the sides of the cake
7. Pour the chocolate ganache on the top

Sprinkle a few shavings of white chocolate on top and garnish with a sew teaspoons of grated pistachio.

I just wish the judges were present at the time we started as they came 1 hour after we started.

This is another competition that is on its first year I wish the next few years would look more like the great british bakeoff.

The fun is everyone cooking the same category like it was bread week once at the great british bakeoff.

Also the fun is in having 1 elimination a time where as here there have been 60 contestants out of which 8 are going into the semifinals:-)

All the best to the finalists.