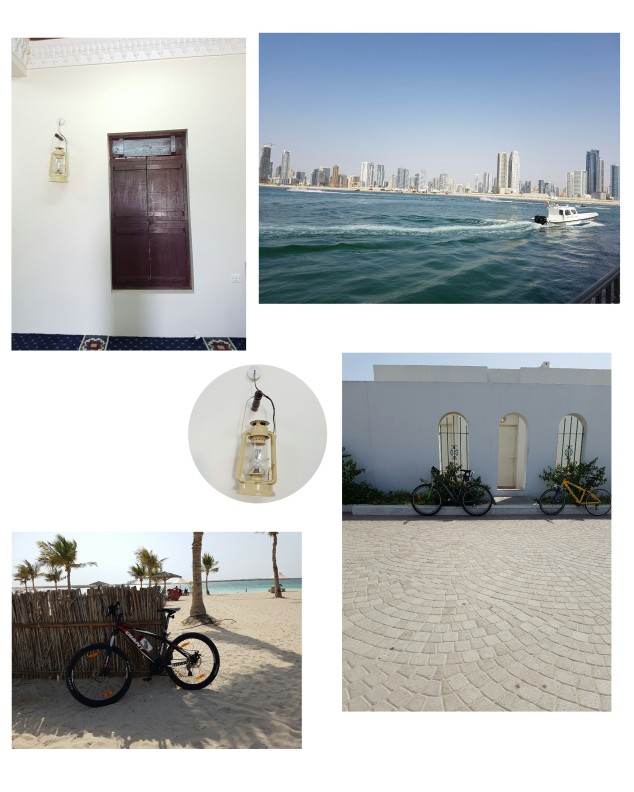 It’s the beginning of summer here in Dubai and I am missing the winter muse. The hot chocolates and warm soups were mostly in the menu during winter. The last few days of the best time to BBQ Is almost here and the parks are less crowded during weekend mornings.
It’s time to stock up on those sun screens and shades while gather the comfortable summer outfits.

Whether it’s summer or winter the atmosphere is mesmerising her in Dubai. The little things are admirable. Dubai never stops pleasing those who are exploring and admiring .
Let alone the new additions I hoped into the mamzar beach park at 12 noon on Saturday. It’s massive and when explored by foot I passed by the information area just opposite the pool and came across 2 bicycles parked beneath a bush. The wall and the iron grill behind the bush created some pattern. I grabbed my mobile to capture the picture. Those are the pictures I’ve always seen online and have been wanting to capture someday.

The walk from the administration office to the prayer room was 1 km and as I entered the prayer room I was drawn towards memory lane.
The Arabian architecture with ancient history was evident in that small room which has blue carpets with red patterns. The windows and doors reminded me of my grandparents house back in negombo which was made of solid wood. The traditional lamps which had bulbs instead of candles reminded me of my grandma’s house. 15 years ago my grandmas house they used a lamp with kerosene and thick string. The light was dim but the surrounding was rather peaceful and warm. Those days have been replaced with rechargeable lamps and batteries yet I was happy to see the lamp.
The borders on the roof reminded me of my childhood spent in my grandparents house. Those patterns meant something special. I believe I have been spending my childhood lonely moments staring at those pattern along the ceiling. Oh the ceiling. The ceiling which was open and made the bottom of the roof visible was even a better view. Laying in bed and watching the ceiling is a meditation in my point of view. I remember the quiet peaceful nights at my grandma’s house where we sleep with the sound of the fan echoing in the clay tiled roof and around the ceilings. We never had television at our grandparents house the nature was our view.

The birds chirping the wind from the beach and the palm trees made the place more comforting. Not just the prayer room the surrounding of this place was also the same.

I have seen the large branches of the coconut tree dried and fallen some people use it as a roof or fence, back in the towns of sri lanka ( not all houses, but a selected lot) The first time in Dubai I saw beach with dried palm tree branches put as a fence in mamzar beach Park. I just couldn’t stop myself from standing still and enjoying the breeze from the sea with the fresh dried palm leaf aroma mixed with sea water. My grandma used to add dried coconut tree branches with leaves instead of firewood and the entire kitchen smelled so good that I still can feel better when thinking about her kitchen. She even used coconut husk as a substitute for firewood which is really an eco friendly way I believe instead of cutting down precious trees.