In our meals daily we have a variety of porridge, some are spicy and some are sweet. The easiest of them all is oats porridge which we usually have it sweet and sometimes dip a bread and eat.
Oats porridge is not only easy to prepare but cooks fast.
● Add a few sticks of cinnamon to give it a cinnamon flavor.

Kurakkan porridge know as white mullet flour is also another porridge which is prepared sweet and also eaten by dipping a slice of roasted bread.
We generally add a beaten egg and cook it for a healthier version.

Rice flake porridge is another yummy breakfast favourite also prepared sweet and often eaten by dipping a bread. It’s also prepared by adding a beaten egg for a healthier version.
Jaggery is added to give a color and kithul jaggery is often known as a rescue for those sugar conscious people. It tastes different too.

Rulang kanji also known as semolina porridge can be prepared sweet or spicy as you prefer. Add some juice of molakia or gottukolla for a green and healthy porridge and serve with dates or jaggery. The sweet version of this porridge is often thickened and presented as a dessert.

Payasam is very common in india and is served as a dessert after lunch. We prepare a sweet porridge with sago and often have it with some pittu or string hoppers for breakfast and sometimes with a coconut roti for dinner. Mainly its a festive porridge in my opinion and jaggery is added to give it a color while some cinnamon and cardamom act as flavor enhancers.

One other porridge often cooked plain and can be eaten spicy or sweet is the one and only rice porridge. Yes the rice is completely cooked and smashed, while thick and thin coconut milk is added to make it a porridge. Generally white raw rice is the main ingredient while a few cloves of garlic, ginger and some fenugreek is added to give it some flavor. This porridge is served with a spicy sambol, left over gravy or a devilled fish for a spicy version, while its served with dates or a piece of jaggery for a sweet porridge. Either way the porridge tastes delicious. You can add some gottukolla juice or molakia juice for a green porridge. You
Can mix in a tempered onion to create an appetite from the aroma and hide the garlic smell.

wash, clean and mince the meat.

Add all the ingredients except bread crumbs and oil.

mix well and make tiny balls the size of a measuring spoon of one teaspoon.

How well do you know your spices is one question.  How much do you love spices is another question.
Can anyone be a spice addict?
Who is a spice addict?
Can they have their house pantry stocked with jars and jars of spices?
Or will they be over flavouring the curries and meals with extra spices?
Or can a spice addict be someone who just tries out various types of spices from around the world?

Well yes spice addicts be of many types but what do you gift a spice addict?
Jar of spices?
A spice from marutius?
Imported fresh cinnamon?

Ofcourse when it comes to buying a gift we all get confused and end up buying something that might be of useful or not. Yesterday I was window shopping at one of the best places to shop where you’ll find all you need under one roof and was surprised by the collection of frames. Handmade it is and an ideal gift for a foodie who is a spice addict.

Ideas for Different use
You can insert a board and attach a sticky note pad on it where you can write the grocery list.
You can insert a lovely food picture and hand on your kitchen wall.
Add your diet plan and leave on top of the fridge.
Insert a note paper with kitchen tips.
Insert a recipe note you like and wanna keep it handy.
Write down instructions for kids to follow in your kitchen.

I know your impatient to have peep into the frames and here I reveal the unique frames especially for foodies.

The frames made of different types of spices. 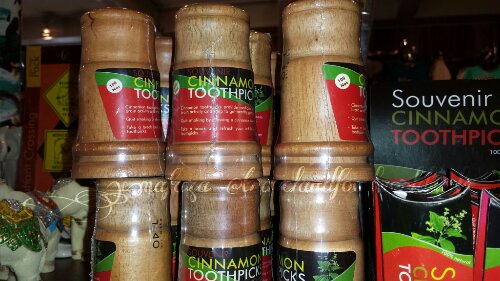 Spice are used mainly in asian food but have you ever tried a toothpick made of a spice?
Are you Wondering if its made of chillie sticks?
🙂
No worries its simply made of cinnamon sticks.
Does that encourage you to try it out?
Keep following my blog and await details on my blogs giveaway.
I will post it if your abroad.

Have a nice day.
Mafaza